Is there any ideal tourist?
How are tourists supposed to behave?
Should tourists be trained according to the country they are going to visit? 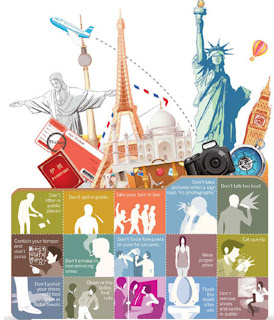 These are questions that came to my mind this morning after reading an article on the China Daily newspaper as I am living now in Beijing. According to a world classification of the worst badly behaved tourists, US tourists rank number 1 followed by Chinese tourists. Obviously this is a very questionable assertion but I thought it could be interesting to read the two online journals (Daily Mail, China Daily) in which this piece of news appears.

Note: Please refrain from commenting on stereotypes or prejudices. Thanks.

Posted by Maria Luisa Ochoa at Tuesday, November 20, 2012 No comments: 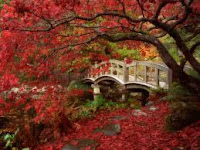 Have you ever heard about the Paris syndrome?
Some Japanese tourists suffer a shock when visiting Paris. Having idealized Paris as the perfect romantic European city for a long time, once in the city they feel disappointed with what they find.

A BBC article by Caroline Wyatt describes this situation as follows:
A dozen or so Japanese tourists a year have to be repatriated from the French capital, after falling prey to what's become known as "Paris syndrome". That is what some polite Japanese tourists suffer when they discover that Parisians can be rude or the city does not meet their expectations. The experience can apparently be too stressful for some and they suffer a psychiatric breakdown. Around a million Japanese travel to France every year.Many of the visitors come with a deeply romantic vision of Paris - the cobbled streets, as seen in the film Amelie, the beauty of French women or the high culture and art at the Louvre.

The reality can come as a shock. An encounter with a rude taxi driver, or a Parisian waiter 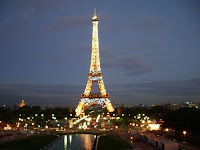 who shouts at customers who cannot speak fluent French, might be laughed off by those from other Western cultures. But for the Japanese - used to a more polite and helpful society in which voices are rarely raised in anger - the experience of their dream city turning into a nightmare can simply be too much. This year alone, the Japanese embassy in Paris has had to repatriate four people with a doctor or nurse on board the plane to help them get over the shock. They were suffering from "Paris syndrome". It was a Japanese psychiatrist working in France, Professor Hiroaki Ota, who first identified the syndrome some 20 years ago. On average, up to 12 Japanese tourists a year fall victim to it, mainly women in their 30s with high expectations of what may be their first trip abroad. The Japanese embassy has a 24-hour hotline for those suffering from severe culture shock, and can help find hospital treatment for anyone in need. However, the only permanent cure is to go back to Japan - never to return to Paris. To know more you can read the article on Msnbc.com Travel News. Have you ever experienced something similar to this in Paris or anywhere else? Please leave your comments.

Glamping: a new type of tourism

Recently I heard the word "glamping" related to a new type of tourism that is rising in popularity. What would you say if someone asks you, do you want to go glamping? Do you know what glamping is?
Well, gampling is the combination of two words "glamour" and "camping." If you like going camping, but you want to the comforts of a hotel, then you need to go glamping and not just camping. Some people are put off from doing camping because of the bugs, wild animals, sudden storms, leaking tents, uncomfortable sleeping bags and questionable food. But there is now a new camping option: glamping. Here the tourist is presented with amenities, stays in fashionable decorated tents with pleasant illumination as well as is provided with full-course meals.
Let´s have a look at the following video that illustrates this new type of niche tourism:

What do you prefer: camping or glamping?Please leave your comments

Until very recently, we thought a 5-star hotel was the highest classification in the hotel range but in the last couple of years some 6 and 7-star hotels have appeared in the tourism sector. Here you can find a list of this sort of hotels. Obvioulsy these hotels offer luxurious accommodation only within the reach of a few as most people can´t afford to stay in them.
But what do you think a 6 or 7-star hotel is? What can it offer that other hotels don´t? Please leave your comments.
Below I have included a video of one of those 7-star hotels built in Dubai: 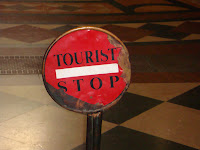 I have just come across this piece of news about a Colombian Amazon village banning the presence of tourists as they are disturbing their traditional way of life. Have a read and please, let us know what you think. This article should also make us reflect on being a responsible tourist and being an unnoticed presence wherever we go.
Posted by Maria Luisa Ochoa at Sunday, March 13, 2011 9 comments:

Maria Luisa Ochoa
Huelva, Spain
I have been teaching English for 10 years. I work at the University of Huelva, where I teach English for Tourism. I believe in online language learning and in its potential within the technological times we are living. If you want to contact me, e-mail me at maochoa35atgmail.com

Another view of the blog

MY STUDENTS IN ACTION

This work is licensed under a Creative Commons Attribution-Noncommercial-Share Alike 2.5 Spain License.

Associations I belong to